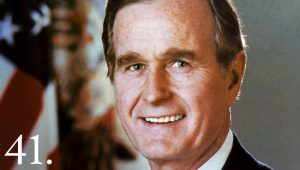 George H.W. Bush (1924-2018) 41st President of the United States, 1989-1993   Political Life In the words of President Harry Truman and President Ronald Reagan, "There is no limit to the amount of good you can do if you don't care who gets the credit.” President George H.W. Bush embodied these words. In his early life, H.W. became one of the youngest aviators in the Navy, graduated from Yale University, and reached millionaire status all before the age of 40. As the President of the … END_OF_DOCUMENT_TOKEN_TO_BE_REPLACED