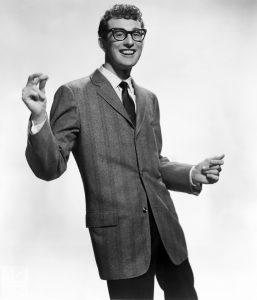 “Death is very often referred to as a good career move.” The source of this disconcerting quote could not have known at the time that he was prophesying his own tragic legacy. Charles Hardin Holley, more famously known as Buddy Holly, was a man remembered for two things. The first was his role as an American Rock and Roll Legend known for pioneering the genre. The second was the way he died. As Don McLean put it, the day Holly met his demise was “the day the music died.”

Born in Lubbock Texas, Holly grew up playing country music inspired by gospel and rhythm and blues. However, when he opened for the one and only Elvis Presley, Buddy had a rock and roll conversion. As Elvis once explained, “Rock and roll music, if you like it, if you feel it, you can’t help but move to it.” Move, Holly certainly did and he was quickly discovered by a record company who formed the hit band, The Crickets.

The next 4 years of Holly’s life was an absolute whirlwind. In 1956, the band began recording music. Between 1957 and early 1958, the Crickets had 7 different singles chart in the top 40. In October 1958, Holly split from the Crickets and moved to the Big Apple. His closing act would come in 1959 when Holly begrudgingly joined the Winter Dance Party Tour.

The winter tour proved true to its name and Holly became sick of the freezing bus rides to concert sites. So, he opted to fly. The next stop was Moorhead Minnesota from Clear Lake, Iowa. The typical flight lasts around 5 hours but Holly’s would only last a few minutes. The plane crashed shortly after taking off, killing all aboard, including the 22 year old star, Buddy Holly. Yet, the story does not end there. Make no mistake; Holly’s life might have been cut short, but his career and legacy have persisted on for generations. This is largely thanks to the efforts of his wife, Maria Elena Santiago-Holly.

Much like his music career, Holly’s love story took place in an accelerated flash of 8 months. Holly proposed to Maria on their first date. They were married just two months later. From then on, they were a team. Maria took on promotional duties and Holly formed the Maria Music publishing company. However, this bliss lasted less than a year. Holly’s young wife was sitting in the comfort of her living room when, to her horror, a television news report informed her of Holly’s tragic end. Soon after, she suffered a miscarriage. Don McLean sang, “I can’t remember if I cried when I read about his widowed bride” but Maria Santiago-Holly will tell you that the music did not die that day. She made sure of it.

Holly died intestate, meaning he left no will. The courts decided to name Maria the sole beneficiary of the rights to his name, image, and related trademarks, and several other intellectual properties, including his royalties. She made sure that all of Holly’s works were eventually released, gave his parents half of the rights to his music, and dedicated her life to building Holly’s legacy. It turned into a massive responsibility and Maria didn’t always handle it perfectly. At one point she even sued Buddy’s parents. However, by and large, the young woman handled the responsibility with grace and tact. Largely thanks to Maria’s efforts, Holly’s earnings went from $60,00 in royalties at death to the multi-million dollar estate it is today. More importantly, his music was heard and his legacy secured.

We treasure Buddy Holly for his contribution to rock and roll. However, when it comes to estate planning, the kid got lucky when he married right. Holly’s story is a classic example of why it’s never too early to create your will or form a trust. This is especially true when you consider that Holly was married and had collected a considerable amount of assets. If you would like to learn more about preserving your own legacy and protecting the one’s you love from the stress of dying intestate, contact the Mendel Law Firm, L.P., for a free initial consultation on estate planning, trust planning, and/or probate issues.