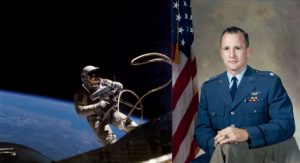 In 2018, over 50 years after the tragic death of NASA astronaut, Ed White, White’s two children, Bonnie and Ed III wrote a commentary piece for The Dallas Morning News about their father. With eloquence, they reflected on their father’s death, “What’s been harder has been watching how people forget. Everyone remembers the landing, the triumph. But people tend to forget the cost. Maybe because it’s easier that way. It’s a shame. Because it’s the failures, the tragedies, that truly define us.”

There are two dates that made Ed White an American legend. The first, June 3, 1965, was when White became the first American to walk in space. The second, January 27, 1967, was the day an oxygen fire broke out on the Apollo 1 killing all three men aboard, including Ed White. This tragic accident, while devastating, also vitalized NASA’s marathon to the moon. On July 20, 1969, Ed’s close personal friend, Neil Armstrong, would cross the finish line when he took one small step for man and one giant leap for mankind on the surface of the moon. White was a key part of this space race not only for his contribution as an astronaut but also as a revered American citizen.

Eyes to the Sky

Edward Higgins White, II was born in 1930 in San Antonio Texas to a highly decorated military family. He followed in his father’s footsteps and attended WestPoint. During his time in university, White showed great academic and athletic prowess. After graduating, White quickly earned his wings and soon became known as an accomplished pilot while serving abroad in Germany. Although already highly successful, in 1957 White set his eyes upward. The thought of becoming an astronaut began to captivate his every career move.

First, White earned his MS degree in aeronautical engineering. Then, he enrolled in the Air Force Test Pilot School. Shortly after, it just so happened that three pilots were needed to fly the seven original project mercury astronauts through zero-gravity exercises. Guess who was one of the first pilots to sign up. Ed not only flew the men from Mercury but also two other famous space mammals, Ham and Enos, the original chimps in space.

In 1962 NASA began the recruiting process for the newest venture into space flight, Project Gemini. Out of the over two hundred applicants, eight were selected. Ed White was one of them. NASA developed a program that was more rigorous than ever before. Yet, White still became a stand out trainee, even amongst the original seven astronauts from Project Mercury. He was described as, “the guy to watch” by the Project Mercury astronauts. Despite all of the rigorous training, White still managed to find time to develop as a well-rounded individual.

White was committed to maintaining his physical condition. He even ran every day to work. Knowing that there would many eyes on all the astronauts, White also joined a public speaking and leadership organization. All of White’s hard work, in and outside of training, became clear when he was selected for Gemini 4. This was an ambitious project that sought not only to make more revolutions around earth than ever before but also to document America’s first step into space.

A Waltz through Space

When White boarded Gemini 4 he carried with him a: St. Christopher’s medal, gold cross, and Star of David. His reasoning was this, “I had great faith in myself and especially in Jim, and also I think I had great faith in my God. So the reason I took those symbols was that I think this was the most important thing I had going for me, and I felt that while I couldn’t take one for every religion in the country, I could take the three I was most familiar with.” This was who Ed White was. He believed the purpose of space was to simultaneously expand America’s horizons and its perspective. Inluding multiple religious symbols on his mission was Ed’s way of doing just that.

The mission was a complete success. America watched on with absolute joy as White waltzed through space, cracking jokes with his partner Jim McDivitt and gleefully exclaiming, “I’m very thankful in having the experience to be first… This is fun!” America gave a grandiose welcome home to the two astronauts when they returned to earth. White and McDivitt met the president, were promoted to lieutenant colonel, and received honorary doctorate degrees from the University of Michigan. It was a triumphant moment for both Ed White and American history. Just two years later, the country would mourn together as news came out that their American treasure had been killed during test of the Apollo 1 spacecraft.

The Legacy of Ed White

Ed White is an American hero. While his contribution to space exploration and sacrifice to this country are neither a small feat, what sets White apart was his character. He was successful, brilliant, and well decorated. Yet, through it all, Ed White stayed good and kind. Success is often marked in dollars and cents or victories won. Yet, many would say the most important thing we leave behind is the beliefs we shared. Legacy planning shares this line of thinking.

While traditional estate planning seeks to protect and preserve material wealth, legacy planning adds a more personal touch. This more holistic approach allows you to incorporate your own values, beliefs, and principles into what you pass down to those you love. If you would like to learn more about preserving your own legacy, contact the Mendel Law Firm, L.P., for a free initial consultation on estate planning, trust planning, and/or probate issues.