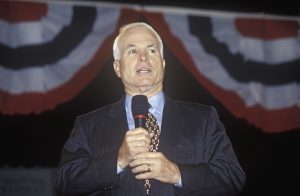 Who Was John McCain?

There are few figures that have captured the American imagination as characters of justice, integrity and above all virtue. Most would go so far as to say that John McCain was one of them. Born in 1936 at the Coco Solo Naval Air Station in the Panama Canal Zone, McCain grew up in a military culture and followed in his family’s footsteps by pursuing a career in the military. He was deployed to Vietnam and was a prisoner of war to the Viet Cong.

After returning to the United States after his eventual release, McCain became somewhat of a celebrity following his time in Vietnam and used his newfound fame to kick start a career in US politics. He ran for Senate in Arizona, and became a crucial figure in the American political landscape.

McCain was well known for his political identity as a moderate. Ranging from campaign finance reform to his surprising support for the Affordable Care Act, John McCain became influential in getting political legislation passed. Although he was a supporter of Reaganesque policy, he was known for making key compromises with Democrats, which explains why there was such outpouring of support from “both sides of the aisle” at his death. He was known as a unifier of American politics, bringing people together even when political polarization was an ever increasing problem in our discourse.

On July 19th, 2017 John McCain was confirmed to have the presence of a glioblastoma. Given the aggressive nature of the cancer, McCain was given approximately less than a year to live. To many people’s surprise yet remarkably in-character, McCain refused to quit his job. While undergoing chemotherapy, McCain continued to work in the public interest and eventually played a critical role in keeping the Affordable Care Act from repeal.

On August 25th, 2018, John McCain died in Cornville, Arizona. The funeral service and public response stood testament to the sort of legacy he left behind. World leaders and American public figures recognized his mark on the country and news of his death filled public headlines.

How was John McCain’s estate planned?

Luckily, John McCain had an estate plan in place. Upon marrying his wife Cindy McCain, he signed a prenuptial agreement which kept their finances separate. Over the course of his life, John McCain accumulated over 15 million dollars in which he has a planned trust. If you want to be a Champ in your own special way, contact The Mendel Law Firm, L.P. for a free initial consultation on estate planning, trust planning, and/or probate issues.