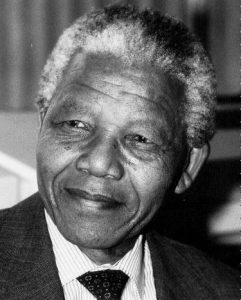 Who Was Nelson Mandela?

According to the Encyclopedia Britannica, the word Apartheid, translated in English means, “apartness.” By this definition, and in the hearts of many, anti-apartheid revolutionary, politician, and philanthropist, President Nelson Mandela was the great unifier of South Africa. He dedicated his life to fighting against the apartheid policy. This policy sanctioned racial segregation and political and economic discrimination against nonwhites in his country. It was a long and perilous road and Mandela faced many blockades both metaphorical and literal. He even endured a 27-year imprisonment and a close call with death row. Despite all the discrimination and persecution Mandela faced, he overcame and came to be known as one of the greatest men in world history.

Mandela was South Africa’s first black chief executive and the first to be elected in a fully representative democratic election.  His government focused on dismantling the legacy of apartheid through tackling institutionalized racism, poverty and inequality, and fostering racial reconciliation.  Politically an African nationalist and democratic socialist, he served as President of the African National Congress (ANC) party from 1991 to 1997.  Internationally, Mandela was Secretary General of the Non-Aligned Movement from 1998 to 1999. He was awarded the Nobel Peace Prize for his efforts in 1993.

After Mandela passed, his family gathered at his foundation in Johannesburg to hear the reading of his Will.  He left money to his children, grandchildren, staff and the ANC. However, he gave nothing to his ex-wife Winnie Madikizela-Mandela. His daughters, each given $300,000 by him during his lifetime, receive no further money now. However, his children and six grandchildren by his third wife, Graca Machel, all shared in his inheritance.

While the “provisional inventory” of £2.52 million appears relatively modest for a global statesman of such stature, the executors of Mandela’s estate said they could not answer questions regarding the destiny of three trusts. They are believed to hold considerably more wealth.  A source close to the process said its eventual disbursement could prove “a massive, treacherous area” and “it could still end up in court.  The trusts could be dissolved and the funds they hold would go to the family members.”

Mandela left behind an unparalleled legacy of peace, dignity, and selflessness. Yet, even politicians of his stature need assistance from professionals when it comes to properly planning their estate.  If you want to minimize your estate planning taxes and/or avoid the probate process, then contact The Mendel Law Firm, L.P. for a free consultation on estate planning, trust planning, and/or probate issues.