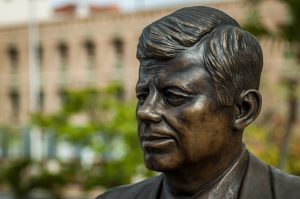 John F. Kennedy was an American politician who served as the 35TH President of the United States from January 1961 until his assassination in November 1963. Notable events that occurred during his presidency included the Bay of Pigs Invasion, the Cuban Missile Crisis, the Nuclear Test Ban Treaty, the establishment of the Peace Corps, the Space Race, the building of the Berlin Wall, the African-American Civil Rights Movement, and the increased U.S. involvement in the Vietnam War. Kennedy was the first person born in the 20TH century to serve as president. At age 43, he was the youngest man to have been elected to the office. To date, Kennedy has been the only Roman Catholic president and the only president to have won a Pulitzer Prize.

Kennedy died tragically and unexpectedly; however, he had the forethought and planning to have a Will containing most of the types of provisions one would expect to find in a modern Will. First, it makes specific gifts of tangible personal property and real estate to various individuals. Second, the residue (remainder) of his estate is “poured-over” to a revocable living trust.

We honor John Kennedy for his forethought and good business sense to plan his estate in advance of his death. If you want to be a Legacy Champ in your own special way, then contact The Mendel Law Firm, L.P. for a free initial consultation on estate planning, trust planning, and/or probate issues.