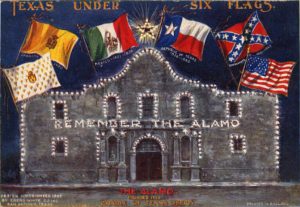 The six flags of Texas refer to more than just every Texan’s favorite amusement park. Throughout the history of the state, six nations have held sovereignty over some or all of the territory of Texas. Each had its own respective flag or flags but the first to fly was the kingdom of Spain’s! From 1519 to 1821, Spain raised two different flags over Texas. This is because a new Spanish flag was adopted by King Charles III in 1690. This is actually a pattern throughout the state’s history.

The complete list of six nations to hold claim from earliest to current is: Spain, France, The Republic of Texas, The Confederate State of America, and The United States of America. France didn’t have an official flag at the time. Instead, there is thought to have been many renditions flown. The Republic of Texas started out with “The Burnet Flag,” a solid blue flag with one yellow star before adopting the modern day Texas Flag design. The Confederate States of America had three designs, none of which are officially recognized by the United States.

In short, there have actually been quite a few more than six flags over Texas! Just like the development of Texas, our estates go under a great deal of changes through the years. Whether your estate or your family is growing, it’s important that your estate plan stays up to date to these developments. Contact the Mendel Law Firm Estate Planning attorneys for a free initial consultation on estate planning, trust planning, and/or probate issues.