Some of these articles have been written by our law firm and other articles are written by the American Academy of Estate Planning Attorneys and compliments of our law firm. Any feedback or questions about the articles can be addressed by contacting our office.

The Return of Apollo 11 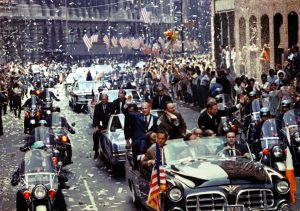 Today, July 24th 2019, marks the 50th anniversary of the return trip of Apollo 11. The three astronauts landed in the Pacific ocean, about 900 miles from Hawaii, and were immediately taken via helicopter to the nearby USS Hornet. Scientists, concerned they may have brought back dangerous pathogens from the moon, immediately placed the crew members into quarantine. They spent over two weeks in a converted Airstream trailer with a colony of white mice that had joined them on their expedition. If the mice survived the quarantine, it was presumed that the astronauts would also be fine. Finally, after 17 days, the mice showed no ill effects and the astronauts were released from quarantine to a hero’s welcome. However, as is true with all non-fiction stories, life marches on.

The astronauts have returned to their normal American lives since coming back to planet Earth. This has included all of life’s realities from the birth of grandchildren to death and divorce. In more recent news, Buzz Aldrin has found himself in the midst of a bitter legal dispute with his children regarding his finances. He is seeking to remove his son, Andy Aldrin, as the controlling trustee of his estate. According to USA Today, his estate oversees memorabilia worth millions of dollars.

This story is a reminder to all of us that life waits for no man, not even an American hero like Buzz Aldrin. Even American heroes must deal with planning their estate. The best action is preemptive. If you have already planned your estate but things in life have changed, it may be time for an update. Please feel free to contact The Mendel Law Firm, LP today for a free initial consultation. Let us help protect what is most important to you.

How Life Insurance Can Fund Your Charitable Legacy

One method for making sure you leave a lasting charitable legacy is to let a life insurance policy do the work for you. Here’s how.

Next Generation Planning for Your Family Business

Many business owners spend so much time working in the business on day-to-day tasks that they forget to ask one essential question: “What will happen to my business after I’m gone?” Most family-owned businesses fail to outlive their owners. Learn how you can help your business survive you.

Many in the LGBTQ community and nationwide are celebrating the Supreme Court’s rulings in U.S. v. Windsor and Hollingsworth v. Perry. What questions do these rulings raise, and how will they affect your estate plan?

Fair Does Not Always Mean Equal

It’s something you figure out early in your role as a parent: treating your children fairly does not always mean treating them exactly equally. The fair vs. equal dilemma extends far beyond the days of mediating sibling squabbles and enforcing bedtimes. Sometimes in estate planning, as in parenting, fair does not necessarily mean equal.

A Living Trust can help you avoid probate, but does it really save you money? Let’s compare the cost of administering a Trust with the cost of probating a Will.

This New Year, Resolve to Plan Your Estate

What are your New Year’s resolutions this year? Ever thought about adding estate planning to the list? You should; and here’s how to do it.

How to Avoid an Estate Planning Scam

Did you know that estate planning scams are becoming more and more common? Here are three tips for making sure you are never a victim.

Most people won’t be familiar with legal terminology if it’s their first time considering a visit to an estate planning attorney. Before a consultation, review this short list of common estate planning terms to help you prepare and feel more comfortable as you begin to create your plan.